This film is being helmed by Conor Griffin and Chris Donovan. Both these guys are very talented and know what they’re doing. The Dance Company is brimming with great material, the question is are these guys getting the goods? Mr. Kim is so funny that he alone could be the subject of his own TV Reality show, so I know that there is the potential for a great film here. I also know that Dono can work some magic in the editing room—but will they get the footage? I hope so. There is always a lackluster buzz surrounding any documentary, but the haphazard shooting schedule of this crew has diminished the buzz even further.

Donovan here, newly acquired by Conor Griffin and Alan AGAIN. Now that TV is out for the year, I’ll be up in film periods 6 and 7! Radical. I know right. Well now that more can be accomplished in school, I can prepare for the next Rebellion contest. word. I’m filming tomorrow at the school, and I want to make an impression at the dance practice. I think I might wear some funky thing. like a neon colored 80’s jumpsuit? or a banana suit? Well, I’ll figure that out later. But really, is everyone ready for rippin’ music, and on top of that, people dancing to it! It’s way too much to handle, I know. In the end, just go to Scoops to get ice cream.

Yea this dance deal is pretty radical. The filming right now is probably going as smooth as the soft serve at Scoops. Mr. Kim (Kimber) is cooperating incredibly well right now with Gruff and I, to the point where he’s just too good. The creative route for the doc still has not been decided, but whichever way we go it’s sure to be a blast. The stock picture for this blog is too far out, so I’m gonna add one. Well make sure to keep checking back for further updates and some more content. – some behind the scenes action?

Also, while you’re reading this, be sure to check out the band The Receiving End Of Sirens. they’re pretty good. aaaaand if you want some ice cream, always swing by your local Scoops. over and out.

Christopher Robert Donovan Jr. dance enthusiest and film extraordinaire has joined the now crew of 2 to take on the Walpole High Schoool Dance documentary. The film is coming together it shall be the most brutal dance film this world has ever seen. I can’t give out too many of dance company new moves and grooves but I can say it will be a triumphant victory for the film fest. Hype it up Hype it up pump up the voulme get the word out its on its way. The great Rick Johnson once said “can you dig it!” of course refering to my up and coming feature documtery.

I have begun to import the film that I have captured in the past 3 dance practices. These practices are a tiny bit awkward for me seeing how i am the only person of the male gender attending these practices other than Mr. Kim. I tend to get weird looks at the camera/me from the girls, which look even funnier on film. I hope they become more comfortable with me and a camera at the practices so the documentary will look professional. The editing has just begun and  already have almost 3 hours of film. I hope i can piece together this film and come up with a good concept for the documentary and show WHS what dance company is all about. 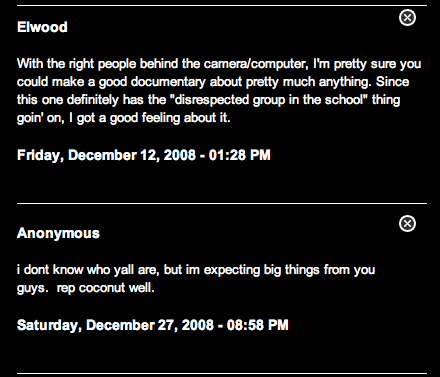